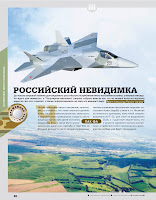 Since the article of Alexander Pachkov ('Paralay') in Nov, 2009 issue of Russan-language 'Popular Mechanic' journal has produced a great interest, I translated the short essential of this text. Paralay is the editor of the popular site 'Stealth Machines'. The article is about PAK FA/FGFA program. Since I cannot check the Paralay's sources out, the question of information reliability is up to a reader. The outlines of his article:

A Saturday reading. A little article about Russian fast boards from the last Naval Show in San-Petersburg. After the article - a couple of words about other projects from RosoboronExport Catalogue. The reference to a Columbian delegation visit is totally irrelevant in my humble opinion, since this country is in US orbit, it fights its own people, has offered basis for US forces etc. Maximum what 's leadership might sell them is a few of light-armed boats to keep them a bit away from becoming an American marionette. The real Russian friends in LA are the Bolivarian initiative countries of course. By the way,  the Russian president will take participation in next summit of this states. 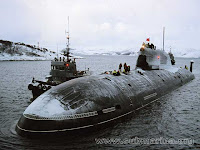 As the Russian RIA-Novosti news agency on Friday reports with reference to 'a high-ranking fleet official': the Nerpa nuclear attack submarine will enter service with Russia's Pacific Fleet in December 2009 and will then be leased out to the Indian Navy. "The submarine has undergone a range of sea trials, and [final] state tests will begin in late October or early November, after which the Nerpa will be adopted by the Pacific Fleet," the spokesman said. He said a crew of Indian submariners would undergo a course of training together with Russian specialists and servicemen in early 2010. They will subsequently operate on their own under the supervision of Russian instructors, after which the submarine will be leased to the Indian Navy under the name INS Chakra. reportedly paid $650 million for a 10-year lease of the 12,000-ton K-152 Nerpa, an Akula II class nuclear-powered attack submarine. End of report.

The Indo-Russian special relationship in nuclear sphere is continuing despite growing Obama's pressure for 'non-proliferation', and could be only comparable to the relationship between US and GB in strategic weapons. In my humble opinion of course…

According to the Russian new agencies and DM reports, the 9th session of India-Russia Intergovernmental Commission on military-technical cooperation (IRIGC-MTC) was rather successful. Some of questions and problems were resolved – was declared by the sides. The protocol for prospective joint military programs' realization was signed by two DMs. It includes:

1)      Complete the bureaucratic formality of PAKFA/FGFA project till year end.

2)      Speed up resolving of Gorshkov's payment issue 'in mutual interest'.

3)      Brahmos air version was confirmed, the acceleration of manufacturing too.

4)      New joint ventures in helicopters' development – the plans for this was confirmed. According to Russian DM was told about a prospective medium lift helicopter.

5)      Joint venture for future IFV development will be esteblished.

7)      The project of Program of military-technical cooperation on 2011-2020 and the project of after-selling support & service agreement were discussed. They will be signed in Dec.2009 during Indian PM visit to .

A contemporary fighter needs periodically upgrade to keep pace with the human technical progress. One of the most promising sensor system for this is the IRST systems, allowing detection of the enemy in air, on the ground and ocean surface. One of the most prominent developers and manufacturers of such systems in is FSUE 'Science-Research Institute for Precision Instrument Engineering' (). Its traditional specialization was the laser-optical systems for space installations. The production is intended for high-precision trajectory measurements in visible and IR spectrum and laser ranging of objects, like satellite and missiles.

The IRST (OLS) systems – are a relative new part in the Institute's activity. Despite this, it offers now two IRST systems with superb technical characteristics. One of them – OLS-UE is offered as a part of MiG-35 program, and the second – is OLS-35 installed on Su-35 fighter, 50 of which were contracted by the Russian AF. OLS-35 is also available for all Su-27/Su-30 family upgrade. It can be a part of Su-30MKI upgrading deal, which is negotiated now in (Oct.14-15) in the Indo-Russian tech-mil committee summit.

The Russian researchers go further for developing more advances compounds and technologies for an anti-radar covering. As it's well known, the airframe and the shipframe stealth geometry gives only a partial answer for the contemporary radar development. Only the centimeter and millimeter long radar waves are effectively deflected by such method while the L-band radars progress is remained the growing treat for military devices. Other complimentary methods are composite use and covering.

The usually used antiradar materials are the resins and paints with ferromagnetic. The new nano-metric anti-radar covering is much more light and stable. It's made with magneto-dielectric layering 2-80 nm thick on a high temperature-steady material. The radar-absorption is about 10 Db in 8-80 GHz diapason, i.e. lg (P1/P2) = 1, while P1 – is the incoming radar power and P2 – the reflected. By the formula with these materials the RCS can be reduced 10 times. Its relative is as  1 – 1.5 kg/m2. High resistance against climatic factors is provided. They have the one-layer structure instead of usually 5-6. 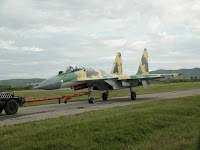 The Russian ARMS-TASS agency has reported Oct. 9, that the contract between the Russian Air Force and UMPO plant (merged in 'United Engine-building Corporation') was signed for 96 Al-41F-1S engines purchase. They will be installed on the serial Su-35S fighters. The first party of the engines would be delivered in 2010, and the whole contract – till 2015.  Al-41F-1S ('izdelie 117S') is developed by 'Saturn' with UMPO input, and it has a thrust vectoring nozzle . Two months ago the contract between the Russian Air Force and 'Sukhoi Corp.' was signed for delivering 48 Su-35S, 12 Su-27SM и 4 Su-30М2 fighters until 2015. About 15 Al-41F engines were produced early for the canceled '1.44 project' of 5th generation fighter, which was developed by MiG corp. during 90th. Al-41F-1S - is the intermediate engine solution for the Indo-Russian PAK-FA/FGFA fighter too, it is going to fly till year end with according to the RuAF plan. India could gain these technologies too if wants. As HAL Indian airspace industry corporation's chief and others admitted early, India has already got the single-crystal blade technology during Al-31F ToT agreement.

India Defence Online reports India is seriously considering to use the Russian 33/RD-33MK engines for the homegrown Light Combat Aircraft, as it already used the Indian Air Force fleet of MiG-29 aircraft.
I have already wrote about this possibility in this blog early. I think, the allegedly selling of an uprated RD-93 engine to China and the current Indian activity around RD-33MK are two related events. Indeed, during some years (more than 5) Russia repeatedly refused to sell the RD- 33 variant with increased thrust to China. One possible reason for this – is the Indian pressure and the agreement between two nations for not allowing China to have more advanced weapons than India. The second one – Russia by self doesn't want China to be too assertive, so the weapons sold for China were always inferior in some degree relative to what Moscow sells to Delhi.

But the technological development is continuing. Sometimes you must run for keeping your place intact. Russia cannot refuse to sell 9 t RD-93 engine for China infinitely (till now it sold only 8.3 t thrust variant). It because the China copy WS-13 (with 7.8 t thrust) is gradually improved and becoming close in its characteristics to the regular RD-93. If Russia refuses now it will lose both the market and the leverage on China. So, the refusing loses its sense. Now the Russian engine manufacturers use Chines money for R&D, so India benefits from this situation too, since China in reality pays for India's advantage. Otherwise the price for new Russian engines, imported to India would be significantly higher.

The 'Lesorub-E' CMS is installed on the Indian 'Vikramaditya' carrier (former 'Admiral Gorshkov'), now refurbished in 'Sevmash'. It's the export variant of 'Lesorub' CMS for the Russian prospective carrier project. According to the developer, NPO 'Mars', the system is designed for combat control of a ship and a task force on basis of the weapon integration into one complex and for the automation of decision making concerning force and armament engagement.

Indian MiG-29K and MiG-29KUB operate from the Russian carrier

MiG-29K and MiG-29KUB fighters were over carrier deck take-off/landing exercises. The exercises were successful, ARMS-TASS reported Sep. 29. Both planes have accomplished a number of take-offs and landing in September 28 and 29 from the Kuznetsov carrier in . The planes are made for Indian Navy and will be based on Vikramaditya carrier now refurbished in . The pre-serial MiG-29K took-off in January, 2007. The first serial MiG-29K plane was made in March, 2008.

Russian TV reports: the radar has a capability for 10 TWS with 4 simultaneously  attacked targets. After accomplishing the Indian contract  the planes (24) will be made for Russian Navy too. RAC MiG can produce first plane within 18 months after a contract would been signed. The airframe life resourse of the new planes is more than twice longer than a regular MiG-29 has. The fly time cost is 2.5 times lower than with an old MiG-29.