A new video about Su-34 fighter-bomber. The main conclusions:
1) A new GLONASS-guided bomb 2 times more accurate, than last American one, - the tests were finished.
2) Net-centric system of information exchange gives the new options for attacks.
3) The cockpit look was shown
4) Su-34 simulator in work
Posted by Igor Djadan at 10:27 AM 51 comments: 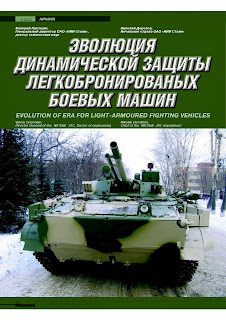 An interesting article about last development in Russian ERA. From NII Stali:

﻿"The change in geopolitical situation in the world, less probability of global military con-flicts and, quite on the contrary, increased number of local and asymmetrical conflicts require  complete revision of the armed forces structure,  including the structure of the Armor, practically in  all world powers. These changes do not imply the  use of large numbers of main battle tanks, but rely  on a wide range of types and a great number of  light-armored vehicles (LAV). Recent military conflicts (Afghanistan, Iraq, Yugoslavia, Middle East)  have clearly shown that light-armored vehicles  are the most efficient solution for such situations,  provided the vehicles feature sufficient all-round protection, high mobility and firepower. The world and European markets of weapons and military equipment have immediately responded to these changes. Thus, for the last decade the sales of tanks has dropped by more than 30%, and the forecast for the near future is unfavorable. At the
same time, the sales of light-armored vehicles, and in the first turn of infantry fighting vehicles (IFV), self-propelled guns and other LAV has been growing steadily, and the highest growth (up to 40%) in the nearest future is expected in the sales of IFVs. One of the most critical requirements to LAV is the desired level of protection. It is actually the criterion which determines the final profile of the vehicle, and it is the focus of main efforts of LAV designers. It should be mentioned that high level of protection is required not only from IFV,
but also from other LAV including APC, armored cars etc.