During long time the Chinese try to achieve RD-93 engines with enhanced capability, the Russian 'AviaPort's correspondent reports. They said that if agrees to sell them this class engine with 9 t thrust they are ready to buy up to 1000 units in total cost of $3.75. Till now didn't agree to repeating and insisting Chinese desire.   was strongly against this deal. It was said in  that in such a case RD-93 will be comparable to RD-33MK engine which is installed on MiG-29K fighter exported for 's 'Vikramaditya' carrier, said an 'Aviaport' source.

So has agreed to export for only a downgraded 8.3 t thrust variant. This engine is installed on the Chinese FC-1 light fighter, recently exported to . The initial contract with 's 'Chernyshev' plant was for 100 RD-93 engine,  $238 mil, signed in 2005. First 15 engines were departed to in late 2006. 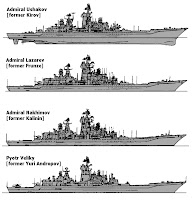 The Russian naval program goes ahead. After declared intention to buy in one of the European countries (, or ) an amphibious assault ship, also known as a helicopter carrier, a Russian military top said that two additional now conserved nuclear-propelled cruiser 's class can be resurrected and enter the Navy service. The deputy MoD Vladimir Popovkin said to 'Moscow Echo' radio-station yesterday that the program for this is already developed. The atomic cruisers 'Admiral Nakhimov' and 'Admiral Lazarev' will come back to service on Pacific and Northern fleets. For the force projection in the remote pelagic areas needs at least two such cruisers on the North and one – on Pacific he said. The current activation of Russian military policy in has to be supported by additional transportation and strike capacity. needs it urgently otherwise its old and new friends there never can be calm about invasion.

Zhuk-AE is ready for fight 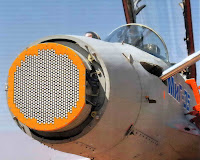 Russian Phasotron corporation reports Sep. 17 , that it has finished the testing program for Zhuk-AE AESA radar. The detection range for a standard aerial target is 148 km and in the perspective it will be raised to 200 km. The Phasotron's General Director Victor Tishchenko said that one of the Indian MMRCA tender request is an AESA radar with 130 km detection range. So, Zhuk-AE fulfills this request, he says.

Seemingly, Zhuk-AE is the first non-american AESA radar for fighter jets ready for use. The others still remain 'paper radars' in many aspects.

The Novella anti-submarine and maritime reconnaissance system (export name 'Sea Dragon') was developed by 'Leninets' (San Petersburg) and intended for Tu-142, Ka-27 and Il-38 modernization. The Sea Dragons variants were named 1SD (for A-40 'Albatros' and Tu-204P), 2SD (for Il-38), SD(H) (Ka-27), 4SD (light planes and UAVs). The weight of SD(H) is only 220 kg. The system has magnetic, electro-optical, IR, acoustic, radar and ESM subsystems.
The low-light-level TV and FLIR are installed in a stabilized turret. Two fields of view 2 x 2 and 9 x 12 deg with a tracking rate of up to 20 deg/sec. Other source reports about 5 optic windows. In addition the aircraft has an IR sensor for initial submarine detection based on water surface temperature – something very useful, if the enemy subs have conventional or MESMA propulsion. The TV-FLIR system can track targets detected by the radar too. 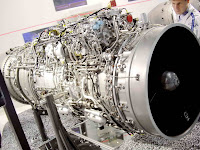 The Indian military delegation has visited in September, 15 a Russian 'Chernyshev' plant, where RD-33/RD-33MK engines for MiG-29K/MiG-35 are manufactured. The deputy Minister of Defense R.K.Singh and HAL's chief Ashok Nayak headed the delegation, 'Interfax-AVN' news agency reports. Two years ago and signed agreement for RD-33 ser. 3 engine license  production in and ToT. Only the first 20-40 aircrafts will be produced with imported of the shelf GE404 engines. The current delays in development fully indigenous 'Kavery' engine for HAL's LCA fighter and the new IAF ambitions for better payload pushes Indian tops for seeking more powerful engine for upgrading LCA. The currently installed GE404 doesn't fulfill the IAF specification and isn't powerful enough for Navy LCA variant. According to the new request they need minimum 90 kN wet thrust for the strengthened LCA airframe and increased load. 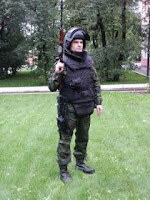 The Russian ARMS-TASS news agency reports, that a batch of body armor was transferred to . The ceremony was occurred in Indian embassy. 30 sets of the body armor were given for gift in order to activize the cooperation between two countries in their war against terror. The Indian Internal Ministry Department chief Redhey Shiam Sharma expressed gratitude for Russian side. The body armor sets will be sent to Indian police forces struggling naxalites armed groups. After Dec. 2008 Medvedev's visit to the cooperation between two countries in anti-terrorist war was become stronger. The 'Common working group against terrorism' has started its work. Then Medvedev confirm Russian readiness to help for in its war against terror. Isn't clear, what this new cooperation includes, the bulk part of it is classified for obvious reasons. 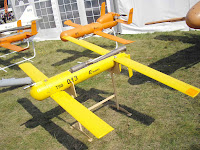 The Russian aircraft industry site 'AviaPort' reports 2009-09-09 about the development of an anti-UAV weapon in . According to the plant chief-designer Sergey Yelizarov, the 'Radiozavod' company from has started the tests of a new system for struggle the incoming UAVs\UCAVs. The system is based on the movable PU12M7 command point of the integrated anti-aircraft system, which can include "Strela-10", ZSU-23, "", "Tor" and other SAAMs. This command point is initially used for the anti-aircraft purpose. For anti-UAV capability it was equipped with a new radar, the ELINT staton and the optic-electronnic sensors. The ELINT station discloses the UAV/UCAV datalink emission, giving the initial coordinates to the radar and OELS. 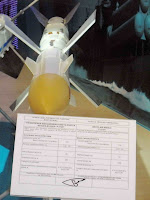 In general, the serial Russian air-to-air missiles are divided into 4 families: short-range R-73 (AA-11 'Archer'), median range R-77 (RVV-AE) and R-27 (AA-10 '') and long range R-33 modifications. All these weapons were developed by the missile design house 'Vympel' and now are manufactured by relative new corporation 'Tactical Missiles Weapon', where 'Vympel' was merged. The upgraded variant of R-33 missile is the 300 km range AA-13 'Arrow' (R-37, K-37, Izdeliye 610 or R-VD), but the fighters with needed radar capability (Su-35) is only entering a serial production.  The same is about 'Novator's KS-172 (RVV-L) missile wich extramally long range (400 km) demand according radar capability. The anti-radiation Kh-31 missile previously has only a limited AWACS-kill capability due to the lack of an active radar. The other kinds of new generation missiles are in active development process in and used to be installed on 5th gen PAK-FA/FGFA fighter. They are yet to be de-classified.
Read more »
Posted by Igor Djadan at 10:40 PM 21 comments:

RIAN's correspondent Dmitry Litovkin reported a week ago about a new improved variant   Kh-35UE of the well known 'Uran' ('Harpoonsky') subsonic AShM. According to his information granted by 'Tactical Missiles Weapon Corporation', the change of the engine to lighter one has allowed bigger fuel tank, which in turn raised the range of the missile more than twice .

Most probably they have changed the old Ukrainian made missile turbo-engine to newest 'Saturn's gas-turbine 36MT engine. It has only 25-33 cm in diameter and thrust of 250-400 kg, dry/total weight 85/100 kg, 0,71 kg/kgf.h fuel efficiency. It allowed the drastic increasing in range for all sorts of Russian subsonic missiles, from tactic to strategic. The missiles speed was also raised.

The 'Tactical Missiles Corporation' is a manufacturer of the 'big bad boys' like Kh-59 long range air-to-ground missile and KAB-1500 guided bomb. During last couple of years a number of new lethal modifications of these weapons were offered for Russian allies. The new weapons have modular structure with changeable warheads, longer range and better defense against jamming. 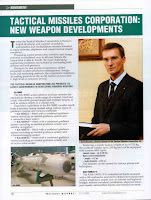 One example: the range of Kh-38 family is rised from 10 to 40 km against its Kh-25M\Kh-29 predecessors. It's known from other sources Kh-59MK2 can have penetrating or cassette warhead (320 and 283 kg). Kh-58UShKE has shorter folded wing for use from internal bays. It hits radars working in 1.2 - 11 GHz A, A', B, B', C diapasons, with preprogramming option for guiding. The range of Kh-58UShKE is rised from 200 to 245 km. Speed - 1200 m/s. The broad using of satellite navigation in both GPS abd GLONASS standards are implemented. This is an interview with the Director General of the Tactic Missiles Corporation Boris Obnossov in Russian English language 'National Defense' issue 1, 2009.

While the Indo-Russian joint venture is developing a new hypersonic version of the universal 'Brahmos' missile  some vendors have already recognized the great success of the program and offer their own input in the development. 'Morinformsystem-Agat' concern is working on the universal shipborn VLSs for 'Brahmos' and 'Club' missiles. In addition to 'Brahmos' (PJ-10) it can launch all the spectrum of 'Club' family, including hitting surface, subsurface and ground targets: 3M-54TE, 3M-14TE, 91RTE2.
The vendor informs:
Ship general-purpose firing complex (SGPFC) is intended for installation on upgraded and abuilding above-water ships equipped with missiles of attack Club-N and BrahMos complexes. 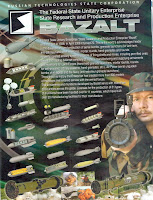 There is a number of new tactical air-to-ground weapons was permitted for export during last two years in Russia. The most interesting in my opinion are 'Bazalt' PBK-500U (the functional JSOW analog) and MPK modules for broad spectrum of bombs (JDAM's functional analog). 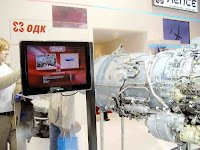 New 'Saturn' gas-turbine corporation chief Iliya Fyodorov says 117C engine, which is installed on the last 'Sukhoi's serial Su-35, is able to achieve supersonic speed without use of afterburner. It was published yesterday in its interview to local 'RyniskOnline' site, and reproduced by other Russian internet-sites too.