- This is a presentation of Russian 'Muromteplovoz's BPM-97 (KAMAZ-43269) armored vehicle with two different turrets for an Arabic delegation. These are 30 mm 2A42 cannon/30 mm AGS-17/7.62 mm PKT and 12.7 mm 'Kord' turrets. BPM-97 – is a new light armored vehicle on the Russian Army, FSB and internal service. It has all around protection against 12,7 mm. However, it's landmine protection is relatively limited comparing to American MRAPs or the Russian SPM-3 vehicle of MRAP class.

Read more »
Posted by Igor Djadan at 7:39 PM No comments:

A 'Sunday read': an article about the chief designer of BMP-2/BMP-3.

Hmmm... it could be interesting for the people abroad. An article of RuAF's commander Gen. Alexander Zelin in Russia's English language'National Defence' Journal, issue 1, 2009 with an exellent MiG-35 view on the cover. Has written about PAK FA too. The sequence of the pages are disturbed, so keep it right: 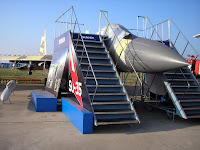 One of the questions often raised in regard to Russian military radar program is why the Russians started development of their AESA so late? Relative lack of foundation in 90th, especially if comparing with the huge military-industrial complex pumping in previous two decades, is a cause of course. However, this cause doesn't exhaust the number of factors for such a late development. Other factor was curiously enough an advance of Russian radar design houses in ESA technology. Until the new Millennium, the AESA technology could not compete with Russian PESA, so there was no a cause to rush for unproved (AESA) technology, while the cost of radar is raised times with it. The western competitors however suffered with lack of so advanced PESA radars like MiG-31 'Zaslon' or naval 'Fregat' spent up to two decades for AESA development. Unlike them Russians did the same progress during short 5 years, when such a goal became actual in early 00th.

Very revolutionary Russian submarine will keep peace near US borders

In September 2007 a little Russian non-commercial newspaper from N-Novgorod made a row when published information about a previously unknown submarine project. In this news was noted that 'Sarov' submarine is finished its building in Severodvinsk (White Sea). Even the name of its commander, captain Sergey Kroshkin, became known to public. The basic specs of this submarine were also published there. The displacement – 2,300/3,950 t, dimension 72.6 x 9.9 m, deepness – 300 m, draught – 7 m, speed 10/17 knots, autonomy – 45 days. No people was disciplined for this seemingly severe leakage. So, the supposition says it could be an 'intended leakage' of information, kind of peaceful Russian gesture for putting pressure on hawkish Bush administration.

Some questions about 'Fazotron's AESA are resolved on MAKS-2009

The comparative estimations of AESA radars became very popular in the discussions on different military fora. It becomes even more important in view of Indian MMRCA tender, where AESA radar existence is seemingly an ultimate condition for win. Last time the question was raised about Russian 'Zhuk-AE' radar capabilities. This radar is offered with MiG-35 fighter for Indian MMRCA competition too. In its initial 680 MMICs 'avatar' it was displayed with the main characteristic of 120 km detection range for standard flying targets (enemy fighter with 3 m2 RCS). However, the last information, published by a Russian new agency in August 2009 just before MAKS-2009 Air Show, contradicts to this figure. Then was pointed to 148 km of effectively detected and tracked air targets. 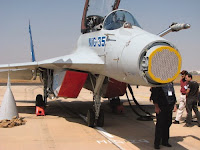 Russian news agency 'Interfax' informed yesterday, that NIIR 'Fazotron's Zhuk-AE AESA radar has finished an important stage of its flying tests.  According to NIIR's chief designer Yury Gus'kov in these tests all air-to-air and air-to-ground radar modes were checked. The testing pilots were very impressed with radar's capability. 'In its last test the radar has disclosed and tracked 3 flying targets on the distance of up to 148 km. All modes of the radar were tested, including in tail-on engagement and close combat ' – said Gus'kov.
Posted by Igor Djadan at 3:28 PM 12 comments: 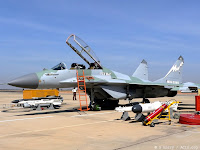 Looking on the long discussions on Bharat-Rakshak Indian military forum I felt the need to make some short review about MiG-35. As usually I use only open source information in my post. It is from different on-line or off-line sources, Russian and foreign.

Sometimes the contradicting sentences are seen about this plane:

1) The aircraft has an old-fashion plane, way older, than any other MMRCA tender contenders except F-16. So it's at the end of its life, cannot be kept modernized in next 20-30 years.

2) The aircraft is a 'paper plane'. So, its capability is totally uncertain and a purchasing would be accompanied with high risk.

The correspondent of Russian 'Independent Military Review' Viktor Litovkin has published last week a new article about Russian 'Tikhomirov's NIIP' radar design house, which is the developer of AESA radar for 5th generation PAK FA fighter (Russo-Indian Future Fifth Generation Fighter - FGFA program). Here I publish my brief translaton of this article in my blog with some my comments at the end:

"The visitors of MAKS -2009 air show in Zhukovskiy (Moscow district), which is starting at August 18, will be surprised. They will see the full-scale AESA X-band radar, developed for the Russian prospective multifunctional fighters (PAK FA). 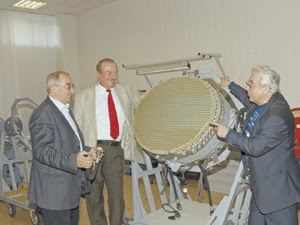 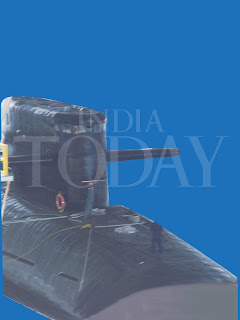 "India Today" has published the first picture of the newly built 'Arihant' Indian first SSBN (via livefist blog). Although the picture is intentionally downgraded and PS-ed the visible resemblance with Russian Delta-IV class SSBN is clear. It rather disproves previous reports (mostly in Pakistani and Chinese media) that 'Arihant' could be a copy of obsolete 'Charlie'-class SSN. The Russian support in 'Arihant' design was  confirmed early by number of sourses. 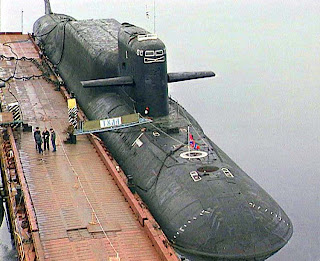 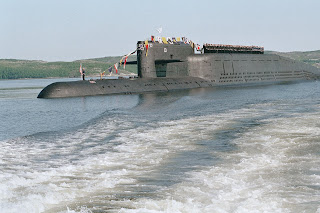 According to the most trustful Russian site 'Atrina'  issued to sub-surfice warfare this class of submarines is very quite. Then an American hunter SSN of «Improved Los Angeles» class can detect Delta-IV from 30 km distance only in ideal condition. 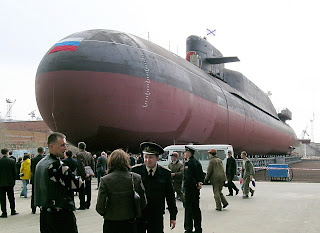 However, 92% of time the weather and hydro-acoustic conditions aren’t ideal in Ice Ocean, then American sonar BQQ-5 cannot detect it at all or the distance of detection is reduced to only 10 km.There are clear visible anechoic plates on the Arihant's skin too, so its probably level of acoustic emission must be close to Russian Delta-IV class. 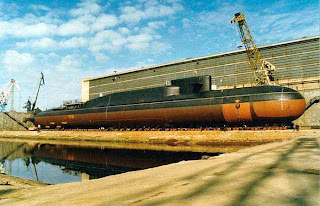 The start of comparative trials on the Indian Medium Multi-Role Combat Aircraft (MMRCA) tender have pulled a lot of attention. First fighter under testing is American F-18 Super Hornet. While F-16 (US), MiG-35 (Russia), Rafale (France), Eurofighter (EU partnership) and Grippen (Sweden) are following it in yet known sequence.

However, the principal question is: whether the huge deal remains as actual as before? Didn’t it loss its importance or\and financial weight? Are Indian's tops still ready to pay for foreign customer that huge sum: $10.5 billions, as was planned early, prior to the world financial crisis was started?

Common sense suggests that nothing could run just as before, while the crisis shown its unhandsome face. Countries like USA, Great Britain, France ponder significant reduce of their military spending. The most ambitious programs, like American stealth-fighter F-22, were cut. Although India happens to be between the less suffering (economically) countries, the behavior of its decision-makers cannot be untouched. The economy gross of India will be significantly lower this year if not negative. The prognosis for 3-years perspective is mostly gloom for World economy, while second wave of crisis is rather possible. Being economy professional the Indian PM Mr. Manmohan Singh would be well aware of consequences for the country's over-stretch in running for too ambitious targets. 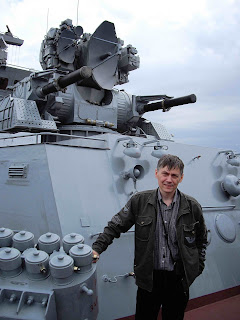 Since it's my first post I have to introduce myself. I'm a Russian politology writer, journalist and blogger. My other blog in Russian is in LiveJournal. There are also the links to all my published papers, accessible online. Only few of my publications like this or this was translated to English. My book about August-2008 War is published in Moscow. This Blogspot's site is created for English-speaking public and issued for problems of strategy, international relations, weaponry, military contracts and adjacent subjects. If something in my texts isn't clear, questions are welcomed. Nice reading! :)
Posted by Igor Djadan at 9:19 AM 3 comments: