There is an opinion that experiments with delayed choice quantum eraser cannot be emulated by classical methods. However, this opinion is not true.

Let's conduct the following thought experiment: imagine that in the direction of Alice and Bob, whose laboratories are located at a distance in space, not pairs of particles are launched, but pairs of macroscopic arrows at different random angles in a certain plane (YZ). All participants in the experiment know in advance that each pair is launched at the same angle to the Z-axis, but if we take many pairs of launched pairs, the angles are randomly distributed between the pairs of arrows. It is also known that if one arrow in a pair is directed with its nose in one direction, then the other - in strictly opposite direction.

The registration of arriving arrows in each space laboratory is as follows: at the edge of a circular hole in the plane (YZ) in the spacecraft of Alice and Bob, which are distant from each other, through which the arrows fly, there is a registration sensor directed to the center of the hole. He knows how to register the 'nose' or 'tail' of the arrow. If the arrow is turned towards it with the nose at least at a small angle, the arrow sensor registers the 'nose'. If on the contrary, then the 'tail'. For clarity, we can assume that there are red lights on the 'noses', and green ones on the 'tails', and only one of the two lights is visible to the detector. 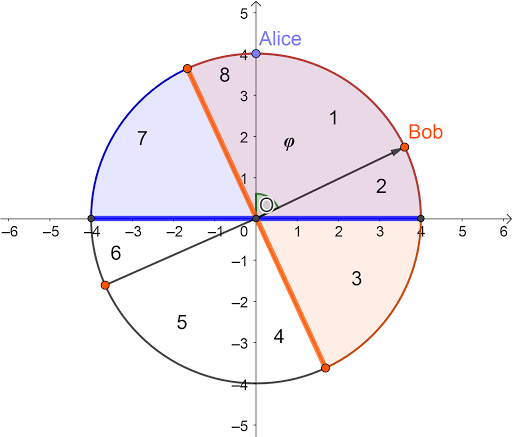 In the diagram, the holes in the walls of the space laboratories of Alice and Bob are superimposed on one another. During the experiment, a strict arrangement of these holes in parallel planes is maintained. Alice's and Bob's pointers for registering arrows are mutually located as shown in the diagram: at an angle φ.

Read more »
Posted by Igor Djadan at 8:48 AM No comments:

The nonlocality theorem of 'Another' and the 'hard problem of consciousness'

While in Plato the Soul, with the help of Reason, learns sciences, in Aristotle it itself is an object of scientific study. The states of the soul, according to Aristotle, come from the state of the body. In modern terms, consciousness is an 'epiphenomenon' of the body: and if the body corresponds to certain characteristics (functions), it should necessarily be interpreted as the presence of consciousness or 'mind'.

In another way, this idea can be formulated through the 'principle of supervenience': 'it cannot be so that one state of the body would correspond to two different states of consciousness, the opposite is quite possible'. The principle of supervenience puts mind and body in unequal, asymmetric relations, where the source of causation, movement and, in general, any change is the body, and consciousness is like a 'mirror'.

It follows that if the body is in the state of F, possessing consciousness, then it cannot be in the same state of F, and at the same time be a soulless 'zombie'.

Any suitable body is 'infused' with mind - this is the opinion of the functionalists. Of course, 'suitable' means the state of a living, healthy (or nearly healthy) human body.

The paradox is that modern physical theory is such that it does not just allow, but requires the existence of 'zombie twins', that is, living bodies that are obviously have not consciousness. We have formulated this statement in the form of a theorem.

The theorem on the nonlocality of another consciousness

To begin with, let us choose a frame of reference in which events A and B occur simultaneously:

1) consciousness Ψ1 is present in the body of F1 drinking wine (event A), and

2) consciousness Ψ2 - is present in the body of F2, contemplating the surroundings (event B).

It would seem that both minds from any point of view are localized in time. However, in reality this cannot be. After all, if the body of the owner of consciousness Ψ1 changes its speed, then in the new frame of reference in which it finds itself, events A and B for it will no longer be simultaneous!