How to win in the missiles race. Part 1. 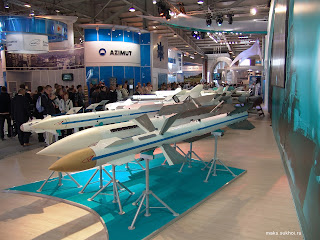 This is an interview with the chief of Russian 'Tactical Missiles Weapon Corporation' Boris Obnosov about the latest development. Initially it was published in 'Expert' journal.

The tendency toward the total liquidation of strategic carriers and warheads, fixed in the new Russian- American agreement  , unavoidably will lead to the fact that the role and the significance of conventional weapons    will sharply grow   in the very near future. But if with our arsenal of strategic weapon we actually can on the equal talk with the Americans,   in the sphere of conventional armaments there is no basis for parity. For example, the number of our contemporary combat aircraft   is approximately 15 times less than in the , the disparity in the number of 'blue water' combat ships between and is as 20 times. This means that in   “global nuclear zero” situation has no enough against its potential enemies.
The problem here is not in the quality of our tactical armaments, but in their quantity. While the Americans during the last ten years stocked up more than hundred thousands   aircraft bombs alone,   our army within the same period purchased the air based weapons for only   one day of war. This is so despite the fact that the new Russian missiles,   are not worse than American, but even they are better in a number of characteristics. The main developer of them is "Tactical missile weapon corporation' (KTRV in Russian abbreviation). This is one of most secret corporation in whole Russian  military-industrial complex [VPK in Russian abbreviation]. It was created about eight years ago during the consolidation process of Russian MIC, now it includes almost two ten different enterprises, plants and design houses, dealing in the sphere of air, ground-based and naval weapons. The general director of KTRV Boris Obnosov said us  about the development of new missiles and torpedoes and how they differ from the American analogs, why we should fear and in what direction   it is necessary to develop its air-based weapon .